A team we will hear a lot about over the coming years is Mount Si High School in Snoqualmie, Washington. The program has continued to get better and better and currently is home to one of the top youth programs in the country. Highly respected Trainer/ Coach Colan Sewell said after seeing the 10/11 year old team play, “They will not lose a game in high school, they are that good”.

The team is coached by former NFL Vet Hugh Millen who son is the quarterback. ” They could potentially be the best group of 5th & 6th graders in the country, they use multiple formations and shifts and no one will come close to beating them here”. Bold words from a guy that knows his football.

This years Mt Si team is going throw a lot more than last. The talent they have returning on the perimeter is something to be excited about as a few kids showed up this past week and put on a show at the NEI/Barton Elite Event.

The Wildcats finished (7-4) last season lead by Head Coach Charlie Kinnune, and won a playoff game before falling to eventual state runner up ODea in the second round of the playoffs 17-3. Griffin McClain (6-5 240 Jr. TE/DE), Hunter Malberg (6-1 185 Jr. FS), and Jimbo Davis (5-11 165 Jr WR/CB) all showed up at our elite event and performed above and beyond expectations. Combine this with the return of All Everything Wide Receiver Trent Riley (6-3 190 Jr.) from injury, and 2nd Team all league wideout Tyler Button (5-7 155 Jr WR) from this past season and you have what amounts to a plethora of weapons.

McClain was one of the most impressive kids out of the 50+ all stars in attendance. He was a first team all league TE in 2011 and returns as maybe one of the top two Tight Ends in the State of Washington. His ability to catch and move is extremely unique for a big guy as his upside is off the charts. He’s got a 90 MPH fastball and also plays Varsity Hoops so the kid is legitimately one of the best overall athletes in Washington. McClain says, “We want to win the Kingco and get to the Dome next season, and I think we have the guys to do it”. He continued, “Personally I would like to play college football at the highest level possible and get my school paid for”.

Sunday changed Griffin’s life, in that by getting to the elite event we are now able to confirm how talented the kid is, where as before we would have had to rely solely on film and word of mouth.That is what makes our events so unique. If you can ball against the top competition then that speaks for itself.

Malberg stole the show from his DB position on Sunday just locking up receivers all day long. It was one of the most impressive performances that we have seen in awhile. He was a first team all league safety, leading the conference in Int’s (6) while finishing second in tackles (83.5) last season. Hunter doesn’t look like the baller that he is at first glance, but you get him on the field and he is an assassin. He will be considered one of the Top safeties in Washington and says, “we are very excited to get back on the field, and feel good about all the starters and experience we have coming back…All I want is to do whatever I can to help my team get a championship”.

Another two way starter that is returning is Davis (5-11 165 Jr. WR/CB) who earned honorable mention all league honors, and is a kid that just flies around. McClain says, “he’s just really football smart and very rarely makes mistakes, he will be big for us next year”. Davis is also a track kid and a return specialist so you can expect to see him take a few back over the course of the season. Complimenting Davis will be Button who is small, but ridiculously quick and will just give Mount Si another option.

Maybe the most exciting aspect to this upcoming season will be the return of Trent Riley at Wide Receiver. He was a second team all league kid as a sophomore, but missed all of last season with an injury. The 6-3 receiver is someone McClain calls, “The real deal”. With this addition and the already talented kids that they have Mt Si could do big things in 2012.

We will continue to bring you updated info on all of the top kids and look forward to working with Mount Si in the future. 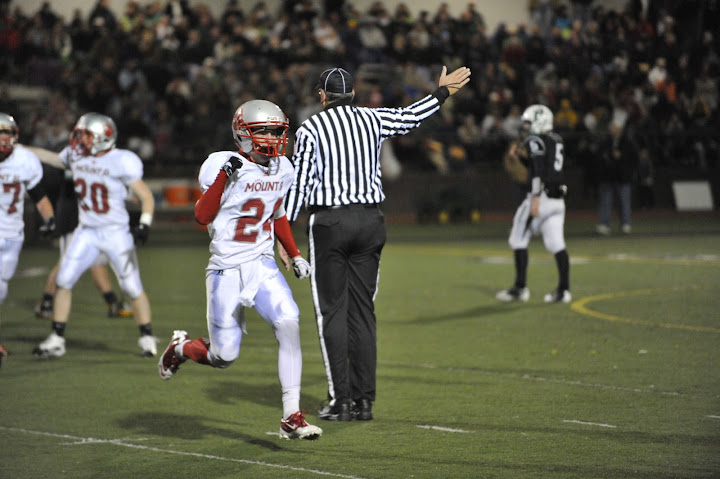