*Before Reading This Article Watch This Video*

Speaking with Tigard Coach John Rasmussen before the season we talked about Junior AJ Hotchkins (6-0 225 Jr. FB/DE) as a kid that could have a big year. We didn’t realize to what extent he meant.

Hotchkins lays as much hat as any kid we have seen in the last few years. He plays out of position as a D End due to his ridiculous athleticism, while blowing people up all day as a fullback. He has been the lead blocker for the #5 Tigers who sit at (8-1) and are a legit state title contender. Watching his video you see a kid that has complete disregard for whoever is in his way. His ability to block was impressive, but the force for which he lit people up was astounding.

We have Hotchkins ranked as one of our Top 5 Junior LB’s state wide, and recently listed him as the Conference favorite for Defensive Player of the Year. He plays on the D line, but projects as a backer with his size. AJ Says, ” We as a group are all on the same page and prepare as a team for every Friday night”. More then anything Hotchkins is a team guy, as he doesn’t need to be in the end zone to make a statement.

He is currently blocking for the three headed monster in (Zach Floyd, Kaz Greene, and Benny Wick) who have torn up the state for the last two seasons. Those three will graduate, and next year he will block for super talented dual threat back Manu Rasmussen. As good as this senior trio has been, the Rasmussen/Hotchkins tandem could be lethal.

“Personally I want to have a great off season and get bigger, faster, and stronger while attending the top camps and hopefully getting an invite to the NIKE Opening”. AJ’s not short on goals but he lets his play due the talking. He’s has prototypical fullback size, and will be recruited heavily by schools who use a FB on the regular.

We are looking forward to seeing AJ on the NEI/Barton Camp and Combine Tour, as he is a super talented kid and someone that will be able to write his own ticket with continued progression. 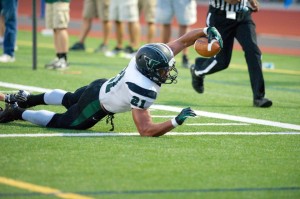