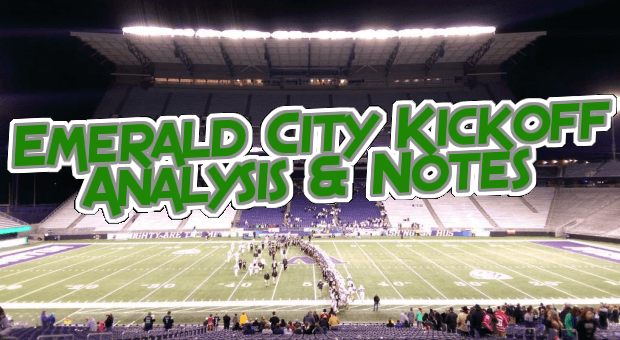 It was nice to be back in Husky Stadium watching high school football, but if the WIAA wants to sustain the Emerald City Kickoff, they need to do a better job at getting at least one marquee matchup or big name team from out of state.

After last year’s debacle at Memorial Stadium in Seattle, the attendance numbers were as low as I have ever seen them at an ECKC. The biggest crowd of the night was arguably up from Vancouver, and they sat through a two hour lightning delay.

I am all for giving everyone a chance to play under the big lights, but they really could do a better job with this event.

That being said, below you will find a link to a game report from each of the day’s four contests, as well as athletes that stood out to me and notes to took during the game.

If you are a Cascade Christian fan, this game should’ve left you very encouraged about the rest of the season.

A young Cougar team battled back from a 13-7 halftime deficit, and showed they are capable of making some noise this season.

Josh Seaton (’16) was all over the field for Cascade Christian and showed he is ready to step up and be a leader on both sides of the ball. Seaton looked good at QB in the second half, but really showed his athleticism and playmaking ability on the defensive side as a Safety.

Madden Tobeck (’18) put on some good weight, now listed at 6’0″ 181, and is really starting to resemble his brother Mason (Utah State), who was actually listed at about the same height and weigh during his sophomore season. If he continues to grow and work hard, like Mason, he could end up in a similar recruiting situation.

Two other 2018 athletes I really liked were Tyquon Coleman (5’10” 160) and Tanner Carle (6’0″ 202). Coleman has tremendous overall athleticism, and is a name I hear a lot when talking about the Cougars. Carle was impressive at TE, where he routinely went against much bigger opponents.

Taylor Rapp (’16 – UW Commit) did a little bit of everything and was a lot of fun to watch. Forced to play some QB because of injuries, Rapp was truly the heart and soul of the team. He was all over the field on defense, and had an INT.

I liked the play of OL/DL Jeremy Johnson (’16). He has a mean mentality on defense and finished with 4 tackles, one for a loss and a sack.

The most impressive performance of the day was that of the Olympia Bears. Time will tell, but we may have overlooked the Bears.

While I do think this is a down year for Ferris, Olympia really dictated play by hitting everything in sight and flying to the ball.

I don’t know how many tackles he had on the day, but it seemed I like every 30 seconds the announcer was giving Clay Markoff (’16) credit for another tackle. Markoff was all over the field all day and when he wasn’t in on a tackle, was usually within a few yards of the play. Markoff also did a great job clearing a path for RB David Gunther (’17), who finished with about 100 yards and 2 TD’s.

David Woodward (’16) looked great on both sides of the ball for Olympia. He played a little QB, but saw most offensive reps at WR, and was great defensively manning the single high safety spot. Woodward has good size at 6’3″ and 200 pounds, and showed good all-around athleticism and great instincts.

Olympia has a couple of big boys on the OL with seniors Brett Thompson (6’4″ 230) and Nolen Young (6’3″ 275). Both play a physical brand of football, which fits perfectly with the hard hitting mentality Olympia used throughout the day.

I liked the play of juniors Skyler Davis (5’10) and Zaiden Hernandez (5’11” 180). Davis made one of the more spectacular catches I have seen in a long time, and was great all day at TE. Hernandez complimented Markoff very well at LB, and seemed like he was always there when Markoff wasn’t making the tackle.

You’re going to want to keep an eye on Jaden Toussaint (’19). He already has good size at 5’11” and 175 pounds, and has all the tools to be one of the better players in his class.

While things didn’t look great for Ferris, they do have a nice set of underclassmen, and only have seniors listed on their roster.

QB Logan Bunker (’17) has nice size and a good arm, just didn’t have a lot of time to throw. Johnny Via (5’9″ 200) showed good athleticism and a tough mentality. Koran Burks (’17) looked good at LB, with good size and a nose for the ball, he is one to watch. Matthew Slagle (’17) was in the rotation at DB, and I really liked what I saw. He was always around the ball making plays.

This was a strange game. Auburn led 7-0, when lightning delayed the game for over two hours. The teams then played about 10 minutes of football, before taking a halftime break.

Mountain View’s Preston Jones (’16) is a lot of fun to watch. I saw him last season against Bethel, and was very impressed, but he looks to have gotten stronger and faster. He returned a kickoff for a touchdown, it ignited the crowd and jumpstarted his Thunder teammates, who proceeded to reel off 24 unanswered points.

Teaming with Jones in the backfield was Taj Albeck (’17). While he doesn’t have the game breaking athleticism as his backfield mate, Albeck brings a toughness needed, as he plays more of a FB type spot. He finished over 100 yards, and they were hard earned.

Center Christopher Mitchell (’16) looked great for the Thunder. He gets tremendous push in the run game, and looked very capable in the pass game. Mitchell reminds me of Eastside Catholic’s Alex Neale, as he doesn’t have prototypical size, but is an absolute gamer.

Auburn only lists 33 athletes on their roster, but they had multiple athletes not listed, regardless, that is a very small roster for a team that usually has big numbers.

They also usually have a couple undersized RBs, and this year is no dfferent. Malik Williams (’16) and Kev Clay (’16) are both listed at a generous 5-foot-9, and are two of the faster players in the area. Williams returned a kick for a TD and led the Trojans in rushing, while Clay scored twice on his own.

QB/S Justin Ioimo (’16) has good size at 6-foot-2, 200 pounds, and look good on both sides of the ball. Ioimo plays a centerfield-like Safety spot, and does a great job tracking the play. EJ Brown (’17) was fun, with his hit first mentality. Loved the play from Demetreus Taua (’16), who was just mean and nasty all day.

I don’t see a game report anywhere, which is strange when you consider the T.N.T. had a “staff writer” earlier there in the day, and both of these teams are in their coverage area.

This game was actually 7-0 late in the first half, before Bellarmine Prep settled in and really started to run the ball well.

RB Ahmad Lewis (’16) of Bellarmine didn’t get in the end zone, but did a lot of the heavy lifting. He runs hard and has good speed, and is very much under the radar. The “backup” RB was Matthew Money (’17), who finished over 100 himself, and looks to be more of a power-back.

LB/TE Erik Glueck (’16) did a great job blocking on offense and was all over the field on defense. He was only credited with 6 tackles, which I have a VERY hard time believing.

Tackles Paul Gicewicz (’16) and Nico Xitco (’17) both had really nice nights, leading the way for a run game that finished with 276 yards.

Keep an eye on Chase Chandler (’18). He was only credited with 2 tackles in the game, but has a very bright future as a WR or DB.

I really liked the play of Bonney Lake DB’s Braydo Tressler (’18) and Jordan Cozzi (’16). Both athletes did a great job limiting big plays and while they weren’t credited with many breakups, they were all over the receivers.

Want to give a shout out to BillyBob Hornbuckle (’18) for having a great name. I was told his real name is William Robert Hornbuckle, and while it is a tad disappointing, it doesn’t deter me from saying he has the best name in the state.