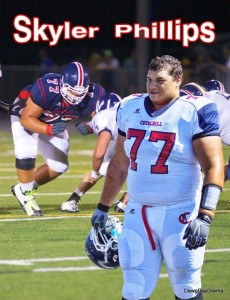 One of the top teams in the State of Oregon at the 5a level is Churchill out of Eugene. The Lancers are currently 3-0 and ranked #6 in our latest NEI Top 10. This years group is the best team that the school has had in years, and they aren’t looking to finish second.

The schools prime time player on the line is Skyler Phillips (6-3 325 Sr. OL) , who has blown up on the recruiting front after his selection to the prestigous “Nike Opening”. Phillips was offered by Oregon St a few months back after changing his life with a very successful camp and combine season earlier in the summer. Phillips is the leader of the crew up front, but the perimeter of the team is one of the best in the northwest as well.

Churchill is lead by one of the top senior QB’s in Oregon in Mitch Reese (6-3 200) , as he has done an absolutely phenomenal job preparing himself and his teammates for the 2012 season. He earned 2nd team all league honors last year throwing 22 TDs to 5 Ints, with 2,103 yards passing and a quality 64% completion pct. This season they blew out their first two opponents, and after three games he has thrown 8 TDs and 0 Ints. The kids a baller, and is currently ranked one of our top QB’s for the 2013 class.

Reese’s favorite target has been fellow senior Andrew Bennion (5-10 170 WR) who caught 13 passes for 141 yards and 3 TDs on Friday, giving him 7 TDs and 25 catches on the season. Bennion was an all league kid last year after hauling in 40 catches for 687 yards and 10 TDs.

Junior running back Tyler Reid (5-9 165 RB/DB) is quickly becoming one of the highest regarded underclassmen in the state. He was injured this past week, but has run for 419 yards on 27 carries with 7 TDs in his first two games. He was only needed in the first half due to blowouts. Reid isn’t the biggest kid in the world, but his testing is off the charts. We currently have him listed the #5 junior RB in the state on our NEI rankings board.

Head Coach Darren Mehl has done an outstanding job building this program up to where they are at now. The Lancers have produced some good teams over the years, but it has been awhile since they have had a team like this. Skyler Phillips says, ” I think we are all on the same page right now, and we just want to do everything we can to make this our year”.

Phillips is a kid we think very highly of as he has an amazing story to tell. ” When I was younger I got picked on a lot, because I was just overweight and hadn’t grown into my body”. He continued, ” As I got older I got sick of it and decided I would do something about it”. The end result has been a big ,fast, powerful kid that is super athletic and maintains a 3.2 GPA. He is extremely well spoken , and just loves the game of football.

He loves his coaches and teammates and had nothing but positives to say, ” I want to give a special shout out to all my lineman , and specifically Will Dawson (6-4 265 Sr. OL/DL) who has really worked hard and done an incredible job for us”.

The Lancers are going to be tough to beat moving forward , as people are anticipating one of the best 5a games of the year when they meet Marist in a few weeks. It will be an opportunity to beat a team that has crushed everyone for the last half decade, and even more important it will most likely be for the conference championship.

Its a great group of kids down in Eugene, and we will look forward to bringing you updates on all of the athletes moving forward.