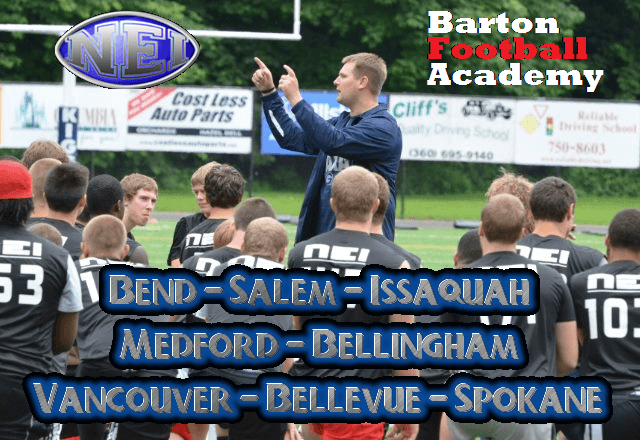 All of us at the Barton Football Academy and Northwest Elite Index are excited to announce our second annual Camp and Combine Tour, which will begin in Bend, Oregon at Summit HS on April 14th.

Our goal is to come to you, to each region within the northwest, allowing us to see ALL of the kids within each given area. By putting on these events our evaluations become much more accurate, getting to see everyone up close and personal.

Every camp/combine is documented via video, and all of the testing that is done is used time and time again by colleges interested in specific athletes. As most of you know the Barton Football Academy is the largest in the northwest, with our coaching staff consisting of a lineup of former D1 and NFL players and coaches.

Not only will we be hosting the events for high school athletes, youth football players will also have their own camp/combine during the day.

We have never been in a better position to help our NW kids that want to play football at the next level. We look forward to seeing you all at multiple tour stops starting April 14th.

“The training and coaching I received at Barton camps when I was younger was instrumental in helping develop me into the player I am today” Aaron Rodgers – QB, Green Bay Packers, Super Bowl Champion

“Taylor Barton and his staff are just awesome. They are good people that are helping kids in this region. I wish we had more people like them” Mike Riley – Head Coach, Oregon State University

“Without Barton Football, I would not make it into the University of Oregon or NFL, period” Kellen Clemens – QB, St. Louis Rams