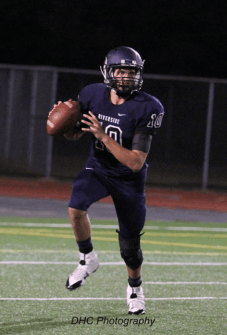 With his senior season completed, Auburn Riverside QB Kevin Thomson can now turn his sights toward recruiting and recently he added his third offer from an FBS program.

“I got an offer from New Mexico State,” Thomson said in a text message to Northwest Elite Index recently.

The offer from the Aggies joins full rides the talented signal-caller already had from UNLV and Idaho. He’s also seeing quite a bit of interest from Wyoming.

This year, Thomson led the Ravens to a 7-3 record and a berth in the playoffs by throwing for 1,656 yards with 15 touchdowns and seven interceptions. He also rushed for 553 yards and nine more scores.

“He’s got the ability to hurt you with his arm or his legs,” Auburn Riverside head coach Bryant Thomas said earlier this season. “He’s a great leader and I think he’ll really excel at the next level because he works hard and is a quick learner.”

Thomson is a good athlete and at 6’3″ and 180 pounds, he’s got the frame to add at least 20 more pounds. He can be a dual-threat quarterback, but he’s at his best dropping back and making plays with his legs when things break down.

Thomson should start taking visits early next month and we will update news on his recruitment once he starts to set up his official trip dates.