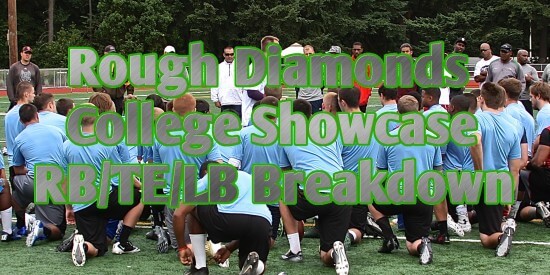 This is part three of the MVP’s and breakdown for the Rough Diamonds NW College Showcase. Earlier this week we showed the Specialists Breakdown , followed by the Lineman Breakdown the following day. In the next few days you can expect to see a breakdown for the QB/WR/DB session. Each state will get a detailed breakdown, with a list of players receiving MVP accolades.

For pictures from the Showcase, including both head and action shots, be sure to visit Northwest Elite Index on Facebook .

The overall MVP wasn’t a surprise as Sam McPherson (’15) did his thing, cutting and juking his way to the top honor. The Kingco Offensive and Defensive Player of the Year is the real deal and will have multiple D1 offers before all is said and done. His abilities are rare to say the least and a plethora of offers are not far away.

Brody Martinez (’15) is a player and one of the fastest rising recruits in Washington. Multiple D1’s have him on their board as he has legit speed and explosion. Adrian Valona (16′) is a junior to be that had a nice day, coming away with Underclass MVP honors. He should play a role for a very talented Tides squad.

Two of Oregon’s top backs joined Martinez in getting MVP’s with Nick Janakes (’15) and Landon Floyd (’15) getting in the mix. Janakes has had an outstanding off season after earning 1st team all league honors on both sides of the ball, while going for 1400 yards and 18 TD’s in 2013. Floyd looked at the top of his game, catching multiple balls and showing off his dual threat ability. He will be one of the state’s leading rushers.

Breakout performer Jovon Lewis (’15) was one of the most exciting athletes on the day. His ability to cut at top speed was unique and he is climbing the charts quickly. Tony Hill (’15) was referenced by elite national analyst Chris Fetters as one of the top athletes in attendance. He will be a force for the Wolverines.

Tyler Clark (’15 Dayton, Ore.) and Mike Schupp (’15 Mount Spokane, Wash.) are two of the better backs in their respective state’s. Clark was a 1st team all league and 2nd team all state kid, playing small school ball, and going for 28 TD’s. Schupp had a great day and will team with D1 teammate Roy Hyatt to give the GSL school a good shot this season.

Peyton Spencer (’15 Curtis, Wash.) has had an impressive off season and can play on either side of the ball, while Andrew Cho (’16 Jackson, Wash.) is a junior that will get his opportunity with Keynan Foster and company. Last but certainly not least is Elijah Funk (’15 Eastlake, Wash.) who did well and could play a solid two-way role for a talented Wolves team this fall.

Mason Tobeck (’15) looks the part and then some and had a phenomenal day. His ability to move in space gives D1 universities multiple options. He currently holds 4 offers from the likes of Colorado State, Wyoming, Montana State, and Idaho. His overall MVP was well deserved.

Jusstis Warren (’15) is one of the top backers in the West and will have an abundance of Pac 12 type opportunities before all is said and done. Multiple school’s have offered but he is just getting started. Three year all conference starter Shawn Munro (’15) had an equally impressive day worthy of significant praise. As referenced recently on NEI, Munro will be a top recruit.

Oregon MVP’s consisted of Pepe Tanuvasa (’15) and Tyson Cooper (’15), both of whom project at the D1 level, with Tanuvasa getting his 1st offer last week. Pepe is at the top of multiple boards ranging from the Big Sky to the Mid Major level. He had one of the best June’s of any athlete on the camp circuit. Cooper is one of the fastest rising defensive players in the state and was a big part of last years state title run for the Rams. This award follows up his MVP at Eastern Washington last week.

Braiden Beckman (’15) and Amahn Edwards (’15) were two other individuals who received recognition. Beckman has been a camp guru and has the size needed to play at the D1 level. He did very well in drills showing off impressive agility. As most know Amahn has NFL genes. He will be a featured athlete for the Saints and head coach Dave Myers. His transfer is big for a school that has made signifcant strides in a short amount of time.

Tyler Wharf (’15) should be considered one of the top backers in Washington making a name for himself over the last year. The 6-3 220 LB has size, speed, and rare anticipation. Marcos Vermelho (’15) is a two way threat that projects from his outside backer position. He is a very physical kid with size that should have a solid 2014 campaign.

Grant Nielsen (’16) is a young backer that earned underclassmen MVP honors. He has an outstanding work ethic and has really come into his own over the last year. Expect him to be one of the better 2016’s in Oregon.

Shane Ward (’15 Rogers (Puyallup), Wash.) and Cameron Scrimgeour (’15 Arlington, Wash.) are two other LB’s that looked great. Ward followed up his impressive “Battle in Seattle” 7 on 7 event with a legit showcase. His overall athleticism was on display as he tracked down receivers. Scrimgeour has grown into his body and looked as good as we have ever seen him. He has the potential to do some things for Arlington defensively this season.

Multiple teammates had impressive showings with Jacob Johnston (’15 Bothell, Wash.) and Patrick Shrum (’16 Bothell, Wash.) representing an already loaded Blue Train group. Johnston is a returning first team all Kingco backer, with legit speed and instincts. Jordan Jennings (’15 Beamer, Wash.) and Marion Jackson (’15 Beamer, Wash.) did some of the same as they are a team that we will be watching closely.

Jackson Davis (’15 Wilson, Ore.) will be one of the top athletes in the PIL as he had an impressive day both offensively and defensively. Fellow 2015’s Liam Durham (’15 O’Dea, Wash.) and Nick Venema (’15 Edmonds-Woodway, Wash) did good work representing Washington. Parker Trewet (’15 Hazen, Wash.) is another kid we will hear about in the coming season as Hazen is a team that just continues to improve.

If you could put Challa Tusse‘s (’15 Tigard, Ore.) heart into some athletes it would be a game changer. The kid gets to everything. Alex Habenicht (1’6 Tahoma, Wash.), Andrew McCoy (’16 Glacier Peak, Wash.), and Nick Rhodes (’16 Juanita, Wash.) are three soon to be junior’s that could potentially find there way onto our rankings boards in the years to come.

Another position, another kid from Bothell that garnered an MVP. Cole Ford (’15) is one of the top TE’s in the region and he had an outstanding day. Ford caught everything thrown his way and already holds D1 offers from Idaho and Montana.

Nikko Thomas (’15) had a very similar performance and capped off an impressive off season. Thomas didn’t drop a ball and made some very difficult catches requiring extension. Both TE’s are a legit 6-4 and had two of the better days of any athletes in attendance.

Jackson Gardner (’15 Inglemoor, Wash.) is a D1 kid but his position is yet to be determined. He is athletic enough to be your TE but projects on the line for many universities. Overall Gardner has had a good couple months on the camp circuit.

Seth Hyatt (’15 Timberline, Wash.) is similar to Gardner in that they are both a legit 6-6. His stock has risen a great deal and a solid 2014 campaign could solidify an offer.

Jacob Moore (’15 North Medford, Ore.) and Joe Burchfiel (’15 West Albany, Ore.) are kids out of Oregon that will be listed as two of the top TE’s in the state. Moore has had a breakout off season doing well at EWU followed by the showcase, while Burchfiel was an all league O lineman for the 2013 state champion Bulldogs. He did a good job staying versatile and catching passes on Sunday.

Kyle Naron (’15 Franklin Pierce, Wash.) had his best day yet as all of the hard work is paying off. He has the size necessary to play at the next level and will look to capitalize on the upcoming season. Dylan Murphy (’16 Newport, Wash.) is another kid that did his thing. Look for him to be listed as one of the top TE’s in Washington for his class. Evan Clasen (’16 Mount Vernon, Wash.) is one of the hardest working TE’s on and off the field, and is starting to see that work really pay off.

Dario Haynes (’15 North Thurston, Wash.) rounded out a group that all presented D1 universities with 6-3 to 6-6 athletic targets. It was one of the most well rounded positional groups we have seen.